Greek Debt Crisis – Will it Affect Me?

On Tuesday night of this week, Greece defaulted on making loan payments to the International Monetary Fund (IMF) to the tune of $1.8 billion. Banks in Greece are closed and will remain so, at least until this Sunday’s referendum vote by the public which will decide if Greece will accept the European Union’s conditions for the loan payments.

The debt problem in Greece is not new – it’s been pretty much in the main headlines of the European economic news since 2009. Simply put, Greece has created a mountain of debt by spending and borrowing money faster than the government can raise money. In other words, the country has been living beyond its means for years and has failed to take the proper political and economical steps that were needed to “right the ship”.   Two financial bailouts occurred prior to this point, in 2010 and 2011. Both times the IMF loaned money to Greece with the conditions that the government would make the necessary changes to avoid a future economic collapse. Those Greek guarantees went unanswered – they kept doing business as usual. 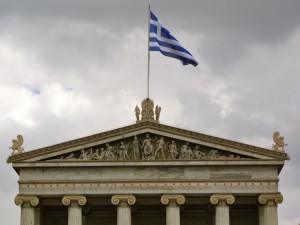 Greece is one of the nineteen countries that is part of the economic union that uses the Euro Dollar as their currency. Their economy represents only 2% of this group’s GDP. While small, their loan defaults could trigger their exit from this Euro Dollar group – something that has not happened since the currency was created in the late 1990’s. Greece would almost assuredly experience another very deep recession. As their economy stands now, they are at a 25% national unemployment rate and have a national debt that nears 200% of their GDP.

The impact on Europe and the rest of the world’s financial markets is harder to predict. Certainly, short term swings in the global financial markets are possible. However, as I stated earlier, this is not a new problem. Europe and the world’s other economic powerhouses have been planning for the possibility of a Greek financial default for some time. European economies are much stronger than they were 5 years ago. Most of the Greek debt is held by the IMF – they can absorb the hit if a default happens. The consensus of  most economists is that Greece does not pose a “systemic” risk to the world’s financial system.

What lies ahead for Greece will play out in the coming days. This Sunday the Greek people will participate in a national vote to voice their opinions of what action their government should take to finally deal with this crisis.