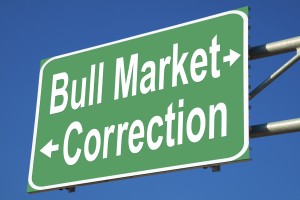 A lot has happened the past few days that sent Wall Street and investors into panic mode. The Dow, S&P 500 and Nasdaq Composite had their worst week in years. All of the indexes took a dramatic downturn Monday, but the Dow surpassed the others by plunging more than 1,000 points (or 10.3%) officially sending it into correction territory. Hoping for an upturn Tuesday, the markets failed to hold a 442 point gain before closing down 205 points. The Dow’s inability to hold onto its big gain shows that an uneasy temperament still remains. Yesterday, however, the Dow roared back, posting an ending day rally of 620 points.

Stock market corrections are normal and occur on a regular basis. They happen more    frequently than people realize. According to wealth management firm Financial Alternatives, Inc, the stock market has a correction (10% drop or more) on average once every 30 months. This particular drop seemed especially dramatic because the market hasn’t fallen that much in five years. Stock market corrections are an inevitable part of the financial markets. There’s nothing you can do as an investor to keep them from happening.

Although stock market corrections happen fairly often, they rarely last a long period of time. According to CNBC, “Corrections generally last two months or less. They usually end when the price of a stock or bond ‘bottoms out’ – for example, some will point to a stock reaching a 52-week low – and investors start buying again”.

Investors who engage in short-term trading look at corrections as a buying opportunity for when stocks have reached their lowest price level. Their buying actually helps push prices back up and stops the correction. However, whatever losses they endure may be magnified in such a downturn. Long term investors, such as those who focus on retirement as their goal, typically don’t encounter extreme losses like short term investors. If your goal is years away, one week of a financial market slump will have a minor effect on your portfolio.

FUN FACT: According to J.P. Morgan Asset Management, 6 of the 10 best days on the S&P 500 occurred within two weeks of the 10 worst days.  (Source: Business Insider)